Health is Wealth- Physical, mental and social health.
The closer you are to safe outdoor areas for exercise, connection with people,enjoying nature, the more benefit to us all as individuals, family and community!

“The most important perceived recreational need throughout the Town of Lynnfield is for additional multi-purpose trails for walking, biking, running, hiking and fitness. It is recommended that a multipurpose trail/path network be considered as part of any new recreational path development."

From the 2013 Athletic and Recreation Facilities Need Survey to which over 400 residents responded.  CLICK TO VIEW REPORT

about the proposed rail trail

Fence and amenities and further design details such as crossings, parking and trailheads along with suggestions from residents are being reviewed and will be included with public input.

Five choices of privacy fence and  landscaping are included in the project at no cost to the abutters.

Friends of the Lynnfield Rail Trail brought this article via a citizens petition.

April 9,2019 - The Yes vote by Lynnfield Rail Trail supporters wins town wide non-binding ballot vote - “Are you in favor of the town of Lynnfield continuing to pursue efforts to develop a recreational path along the unused MBTA right-of-way, known as the Wakefield-Lynnfield Rail Trail project?” This ballot question was placed by the Lynnfield Selectman.

April 24 2017  The Yes vote prevails on the Rail Trail Warrant article by 1 vote, which authorizes the Selectmen to take a lease with the MBTA and develop a recreational path on the abandoned rail bed. Friends of the Lynnfield Rail Trail brought this to town meeting via a citizens petition.

​November 2016 - An updated engineering report was presented to full input session at the Al Merrit Center. See updates for all the details collected. Abutters were also heard and given choices of five privacy barriers. Safety ideas included turnouts and slow downs.

December 2015 - A preliminary engineering report from WorldTech was previewed by the Board of Selectman with a great exchange with the town leaders, engineers and residents.

2012:Wakefield and Lynnfield informed that the project is eligible for Federal Highway Funds

2013:A survey of over 400 residents shows rail trails/paths as top desire (see report link on left)

2013: Town of Wakefield as lead agency enters into a design agreement with WorldTech Engineering of Woburn

Lynnfield Recreational Path Committee met with and residents and answered questions at public events.  We wrapped up outreach to abutters included 2 postcards, a survey followed by door to door visits to learn and document issues and answer questions. See more in the FAQ's 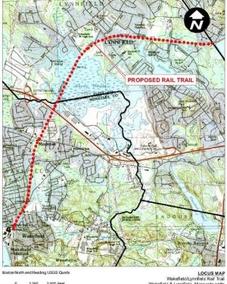 We need your help to convert underutilized land...

Webpage and print materials are funded by volunteers 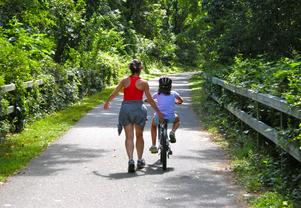 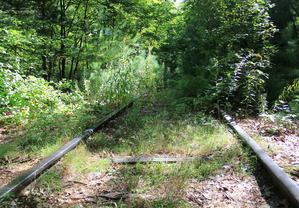 Officially known as the Wakefield-Lynnfield Rail Trail, this is a primarily State and Federally funded project using land leased to the towns of Lynnfield and Wakefield by the MBTA to convert the former Newburyport Railroad bed into a recreational trail that provides for safe off road connection to the towns key resources.

Where does it go?

Beginning near the Wakefield commuter rail station, this existing rail bed passes two Wakefield schools, under I-95 (128) into Lynnfield through a 0.6 mile section of Reedy Meadow, behind our Middle School/Fields, by the Reedy Meadows Golf Course and High School/Fields to the Peabody border. Total distance is 4.4 miles (2.5 in Lynnfield and 1.9 in Wakefield). We hope one day that our trail will connect with other linear paths.  See more on this in the FAQ's.